“Insect meadow” blossomed at the Faculty of Science 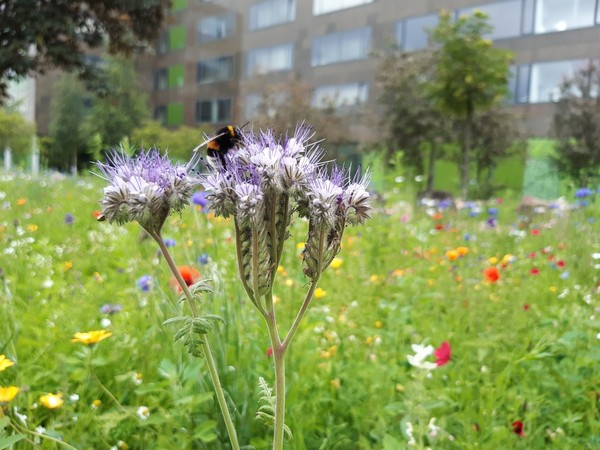 The park adjacent to the faculty building is newly enriched with a blossoming “insect meadow”. It is not a coincidence, but an initiative of scientists who have deliberately created a unique place for insect pollinators on the grassy area. Thanks to the activity, the animals will have access to food until late summer.

The faculty originally had a species-poor lawn. To improve the space, the faculty staff used 40 species of flowering plants (dicotyledons) and 10 species of typical grasses. During the summer days, inquisitive passers-by can see, for example, chicory, oregano, cornflower, clover, plantain, oxeye daisy, sticklewort, sage or a bellflower. There are also summer annuals and grasses, such as timothy, fescue or meadow-grass.

According to Monika Mazalová from the Department of Ecology and Environmental Sciences, any effort to support insects, which provides important ecosystem services, is desirable. “Insect species associated with open habitats, i.e. those not overgrown with trees and shrubs, are disappearing the fastest. It's simple, because these areas disappear from the landscape – they are partly plowed, partly built up, and if we leave them to their fate, they will quickly overgrow with woody plants. That is why today you rarely see the real meadow, varied not only in terms of colors, but especially in terms of the types of plants from which it is formed,” explained the author of the design.

Recently, experts have pointed out not only the disappearance of rare and endangered species, but also the decline in the number of species until recently considered common. There is work that reports a 75% decrease in the numbers of all flying insects. In the case of pollinators, there is even talk of their global crisis. “Of the 38 species of bumblebees and cuckoo bumblebees identified so far in the Czech Republic, 25 are currently on the Red List of Endangered Invertebrates, 5 of which are considered extinct. After all, all bumblebees are protected by law. Of our less than six hundred species of bees, only 229 species are classified as non-endangered species,” added Monika Mazalová.

The aim of the activity is not only to support more diverse communities of invertebrates, but also to beautify the area at the geological exposition and the busy sidewalk. “We established the meadow mainly to support economically important and attractive groups of insects such as bees, bumblebees and butterflies. The seeds were planted and the area for implementation was professionally prepared by the staff of the Envelopa Building Management and the greenery maintenance from our faculty. I would like to take this opportunity and thank them,” said Dagmar Petrželová from the Dean’s Office of the Faculty of Science. She added that the composition of the mixture was adjusted according to the recommendations of the Department of Ecology and Environmental Sciences, mainly with perennials rich in nectar and pollen. Tomáš Opatrný from the Department of Optics is also pleased with the creation of a colorful refuge for pollinators. “Every time I go around, I stop there for a while and enjoy the view. That thing is really great.”

The initiators followed up on the student project Insect Hotels, which was established in 2018, as part of the Dean’s call “Pamper Your Nature”. At that time, its authors created and distributed a total of five dwellings for beneficial solitary insects. They mainly targeted solitary bees and cuckoo wasps, which are also important pollinators of plants. However, there can be many various inhabitants of the insect hotel e.g. ladybugs, common green lacewings, earwigs and heteroptera.

The work of experts to improve the space around the faculty does not end here. In addition to sowing, care and regular maintenance, they will also perform annual botanical and entomological monitoring. The first will enable to detect the possible spread of weeds or expansive plant species and will also help determine the date of possible sowing of extinct species. The aim of the entomological survey will be to monitor the occurrence of those for whom the “insect meadow” was established, and to find out how bumblebees, bees, butterflies and other members of the most species-rich group of organisms on Earth crave flowering vegetation.