Tropical forests can withstand rising temperatures, but only to a certain extent 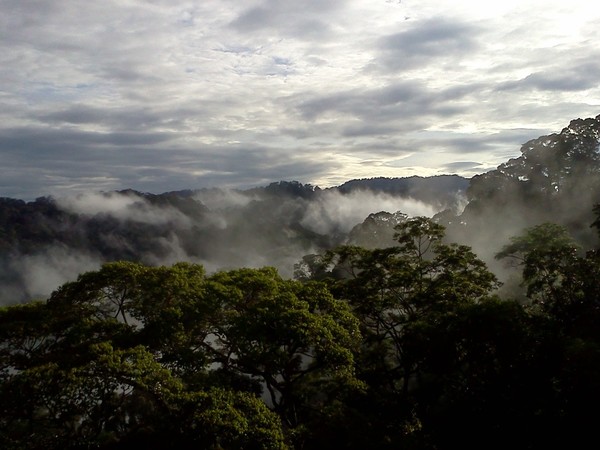 Climate change is preparing an uncertain future for tropical forests. A new study published in Science shows that even in warmer conditions, tropical forests can continue to store large volumes of carbon, provided that we reduce greenhouse gas emissions at the same time. Three scientists from the Czech Republic also took part in this study.

Tropical forests have long absorbed the carbon dioxide released into the atmosphere by burning fossil fuels. This is done with the help of photosynthesis, and through that tropical forests help maintain the stability of the Earth’s climate. Carbon dioxide is one of the main greenhouse gases that contributes to the capture of heat from sunlight. However, the amount of carbon dioxide in the air is increasing sharply due to human activity and currently far exceeds not only pre-industrial values, but also concentrations over the last several hundred thousand years. This retains more and more heat in the atmosphere and shifts the climate balance, i.e. global climate change is taking place.

This new study published in the international scientific journal Science shows that tropical forests are able to cope with global warming without significantly reducing their ability to sequester excess carbon dioxide from the atmosphere. This is the case if the amount of carbon bound by tree growth is greater than the losses due to mortality and wood decay. And this only works under certain circumstances: the global temperature change must not be too fast, forests must remain untouched by human activity and the daily temperature must not exceed the critical limit of 32°C. For example, an increase in global average temperatures of already 2°C compared to pre-industrial values will mean that about three quarters of tropical forests will reach conditions exceeding this critical limit. Any further increase in temperature could then lead to increased tree mortality and rapid release of carbon from forests.

Three authors from the Czech Republic also contributed to these results – Radim Hédl from the Institute of Botany of the Czech Academy of Sciences, Martin Dančák from the Faculty of Science of Palacký University Olomouc and Martin Svátek from Mendel University in Brno. They contributed to the study, which is unprecedented in its scope, by long-term repeated measurements of the growth of several thousand trees and monitoring of their mortality on permanent areas in the Ulu Temburong National Park in Brunei, Borneo. They started operating in Brunei in 2007 and have been systematically researching Borneo's tropical forests ever since. In addition to joint research in the Brunei areas, Czech scientists are developing research on tropical forests in other related topics.

“The world's tropical forests contain so much carbon in trees alone that it offsets fossil fuel emissions in a quarter of a century. If we are able to mitigate climate change, these forests can continue to store large amounts of carbon. However, there are concerns that this repository is gradually ceasing to function, as excessive warming and droughts slow down the growth of trees or increase their mortality. The released carbon could then further accelerate climate change,” adds to the results of the current study Radim Hédl, who conducts long-term monitoring on permanent areas in Brunei.

Martin Dančák is a leading Czech expert on the biodiversity of tropical forests. It reaches one of the highest values in the world at the monitoring sites in Brunei. “It can be assumed that tropical forests are to some extent capable of long-term adaptation to climate change, partly due to their high biodiversity. Trees tolerant of new climatic conditions will grow better than less well-adapted species, which they will gradually replace,” specifies Dančák.

For the first time, this recent study used direct field measurements to examine the sensitivity of the world's tropical forests to climate change. In the long-term comparison, temperature appears to have a major effect on carbon storage through reduced tree growth, while the second key factor is drought, which leads to tree death. Knowledge about how the world's tropical forests respond to climate draws on careful field measurements obtained over decades, often in remote locations. A global author team of 225 scientists combined field data from South America (RAINFOR), Africa (AfriTRON) and Asia (T-FORCES). The amount of stored carbon was determined by repeated measurements of trunk diameters and heights of individual trees on permanent monitoring plots. The areas are visited at several-year intervals; that way it is possible to find out how much carbon the trees have absorbed in the meantime and how long the carbon has been stored in them before they died. The calculation of changes in the amount of carbon stored in trees required the taxonomic determination of almost 10,000 species of a total of half a million trees, 2 million individual measurements of trunk diameter, in 813 forests in 24 countries across the tropics.