New strain of cyanobacteria discovered on the skin of dolphins 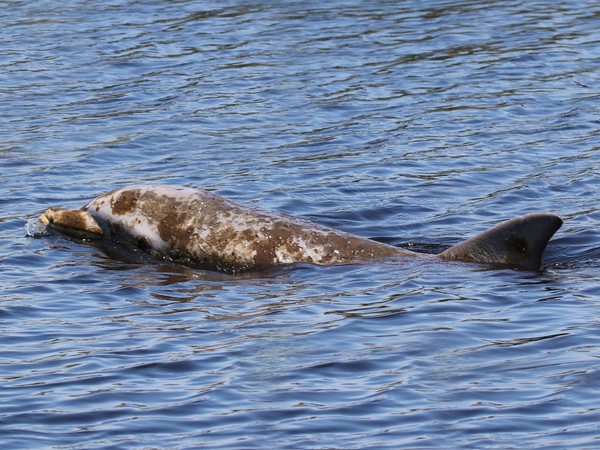 A new species of cyanobacteria growing on the skin of the bottlenose dolphin has been discovered by an international team of scientists who analysed samples from a deposit of microscopic organisms living on the bodies of these cetaceans. The new species of cyanobacteria has been named Komarekiella delphini-convector – “dolphin’s travelling companion”. It has also been found that this cyanobacteria strain has nothing to do with the harmful toxins that have been found in the liver of common bottlenose dolphins in previous studies. Apparently, the toxins might originate from cyanobacteria living in the river. However, this theory has yet to be confirmed.

The results of this research into the build-up of microscopic organisms, in which scientists from the Department of Botany at the UP Faculty of Science participated together with experts from the USA and Australia, were published in the prestigious journal Phycologia.

The common bottlenose dolphin (Tursiops truncatus) inhabits tropical and temperate oceans throughout the world. However, this species is also often found in estuaries, where the salt concentration is lower than in the sea. Experts have not found out yet why these dolphins visit less favourable waters. “Some dolphins go even further upstream, where it is practically freshwater. This adversely affects their metabolism because it is an unnatural environment for dolphins. Common bottlenose dolphins can be observed, for example, in the St. Johns River in Florida,” said Petr Dvořák from the Department of Botany at the UP Faculty of Science.

Due to their weakened immunity, a build-up of microorganisms gradually forms on the dolphins’ skin. They break up the skin, which can result in the death of the cetacean. Among these microorganisms, cyanobacteria have also been identified, which are notorious for producing many harmful toxins. Cyanobacteria, also called blue-green algae, produce extensive growths called blooms, particularly in ponds. “Cyanobacterial toxins have been found in the liver of some dolphins. The study we were involved in aimed to characterise the microorganisms from the growths on the dolphins’ bodies and to verify whether these are responsible for the production of the toxins found in the dolphins’ livers,” said Petr Hašler from the UP Department of Botany.

The experts therefore took samples of the microorganisms from the dolphins’ skin and from the air above the river, using special equipment suspended from a Cessna aircraft. They identified the same species of cyanobacteria in both samples. The whole genome sequence was obtained for its exact classification. Reconstruction analyses of evolutionary relationships and morphology using light microscopy subsequently showed that this is a new species of cyanobacteria, and it was named Komarekiella delphini-convector.

“Genome sequence and other biochemical methods were used to determine the composition of the toxins. Genome analysis confirmed that the new species of cyanobacteria produced several types of toxins, but none corresponded to the toxins in the liver, which belonged to the group of microcystins and nodularins. Therefore, we have concluded that these toxins probably did not enter the dolphins' bodies from the growths on their skin, but from the river where the cyanobacteria producing these toxins are found. Our conclusions will have to be verified by measuring further samples from the dolphins,” added Dvořák.

The risk of overproduction of cyanobacteria and their toxins in both stagnant and flowing waters is increasing due to the global climate changes. Cyanobacteria benefit from warmer temperatures and rising concentrations of nitrogen and phosphorus in the water. “Cyanobacteria thrive in environments with excessive nitrogen and phosphorus. The presence of cyanobacteria and their toxins can be downsized by reducing the amount of these substances in the environment. However, this issue is very complex, and no satisfactory solution has yet been found,” concluded Dvořák.