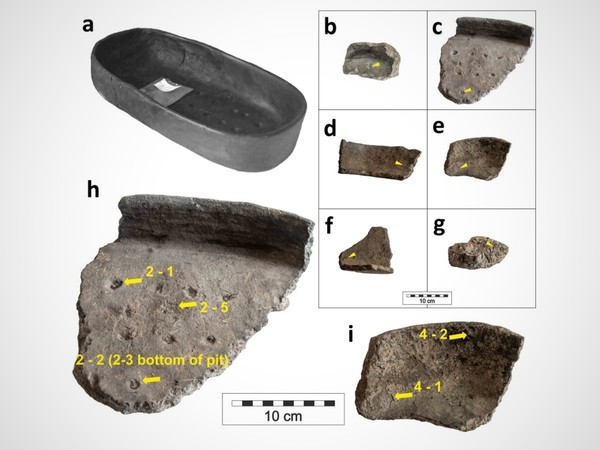 Traces of 7,000 year-old food on the surface of Neolithic pottery from the southern Balkans were discovered and described by scientists from a Czech-North Macedonian-Italian team. Archaeologists, chemists and biologists led by Jaromír Beneš from the University of South Bohemia (USB) and Lukáš Kučera from the Palacký University Olomouc Faculty of Science (UP) analysed traces on large ceramic baking pans found in the early 1960s at Lake Ohrid on the border of North Macedonia and Albania. Research suggests that people at the time enjoyed dishes with pork, flour, and wild plants.

The finds were part of the “pile-dwelling” settlements, which were situated in this locality between the years 5200 to 5000 BC. The research results were published in a special “Applied Analytical Chemistry” issue of the prestigious chemistry journal Molecules.

Specialists took samples from the surface of prehistoric vessels in 2019 as part of a summer archaeobotanical school organised by the USB and North Macedonian archaeological institutions. The samples were then processed at several Czech and foreign workplaces. Microscopic traces of starches and plant fragments were investigated in the Laboratory of Archaeobotany and Paleoecology, USB Faculty of Science, detailed chemical analysis of samples was performed at the Department of Analytical Chemistry, UP Faculty of Science. The genetic-immunological signal from the collected material was then monitored at the University of West Bohemia in Pilsen. Important microscopic identification of non-pollen objects was performed by Assunta Florenzano from the university in Modena, Italy.

The fragments of ceramic baking pans themselves were the subject of research by North Macedonian archaeologists. Based on the presence of entire finds, they were included in the young phase of the Balkan Neolithic. One of the ceramic baking pans was even completely restored. It was possible to remove a few centimetres of burned organic matter from it before restoration. The researchers then found that hyphae of microscopic fungi were preserved in the baked material. This testifies to the not very careful cleaning of dishes by prehistoric farmers.

“Chemical analysis of the obtained samples by gas chromatography in conjunction with mass spectrometry was very beneficial. A large number of compounds were identified in a number of samples, the most important of which was the detection of cholesterol. This substance was found in high concentrations in holes at the bottom of baking pans and baked layers on the inner wall. This finding determined the next direction of laboratory research,” explained Lukáš Kučera from the Department of Analytical Chemistry, UP Faculty of Science.

Further research consisted in the microscopic analysis of plant phytolites forming the ‘skeleton’ of plants as well as in the analysis of starch grains, which did not undergo gelatinization heat transformation during the baking of Neolithic food. The presence of wild plants from the Liliaceae family, the genera Setaria, and genus Typha was detected by microscopy. Starch grains have also been found to indicate the possible presence of cereals, the use of which is very likely in this context. This was even confirmed by the finding of a fraction of the hair of the larva of a cereal louse – a beetle, which is mainly harmful to the stocks of grain and flour.

The interpretation of the results of this research was significantly helped by the immunological analysis, in which Jaroslav Pavelka found the presence of denatured pork proteins in several samples. Two samples, including a larger organic cake, were radiocarbon dated in Atlanta, USA. However, the results showed a greater age of the samples than by dating the pottery using archaeological relative chronology, which determines the dating of artifacts using other finds in the collection in the same archaeological layer where the baking pans were found. However, this effect of the greater apparent age of the findings has been well described in the literature – it is caused by the enrichment with older radiocarbon dissolved in the aquatic environment, where the findings were located for seven thousand years.

Although, the important thing was that both radiocarbon data were the same, which precluded contamination with younger material. In the archaeological literature, it has been considered so far that Neolithic baking pans from Lake Ohrid were used to bake fish. This certainly logical reasoning was based on the oval shape of the baking pans and the geographical location of the pile-dwelling settlement Ustie na Drim near the northern shore of Lake Ohrid. However, the analysis of the samples did not confirm this hypothesis. It is highly probable that the baking pans were used many times and probably also for different dishes. The results of analyses are therefore cumulative, which means that the chemical and biological traces did not have to come from only one type of food. Dishes with pork, flour, and wild plants are the most likely option. A similar dish is still prepared in North Macedonia under the name “peasant meat” and is very popular.

The multidisciplinary analyses of the international team showed the direction of archaeological, chemical, and biological research. Current analytical methods are extremely sensitive and accurate. Thanks to this, scientists can push the boundaries of learning about the lives of the first European farmers and reveal the ancient roots of contemporary Balkan cuisine. “For the first time ever, a combination of chemical and archaeobotanical analysis has been used in research to such an extent. In archaeology, this opens up completely new possibilities for us, never dreamed of until now,” added Jaromír Beneš from the University of South Bohemia.