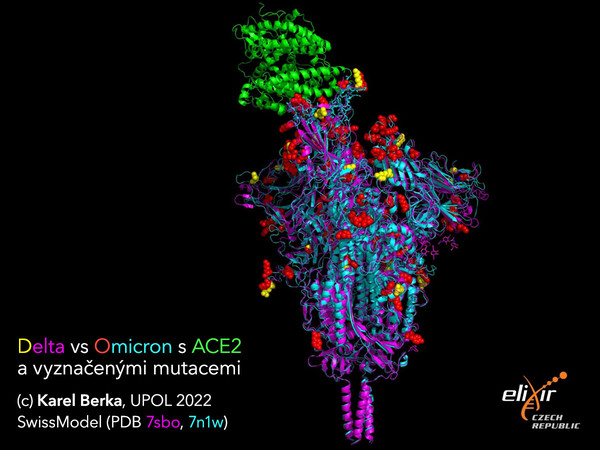 3D models of coronavirus delta and omicron spike proteins provide a better understanding of their different properties and behaviour. The models were created by Karel Berka from the Department of Physical Chemistry at the Palacký University Faculty of Science. On the models of individual variants it is possible to observe differences in mutations of the spike protein on the virus surface that plays a key role in the spread of this intracellular parasite.

Structural models of spike proteins of coronavirus delta and omicron variants were created by Karel Berka with the help of the SwissModel server. They are one of the results of the work of a group of Czech scientists who have been continuously sequencing individual variants of the SARS-CoV-2 virus in the Czech population since last spring, which they are continuously reporting on the COVd server. Since the summer, only the individual sublines of the delta variant, referred to as delta + and AY.*, have been observed here. The observed changes were generally minimal and repeated. The researchers therefore thought that the delta infection in the autumn would be the last, as it seemed that SARS-CoV-2 had reached its limit. “My colleague even said that the virus was starting to be scientifically boring. However, one day later, the omicron variant appeared and it was a whole new world,” said Berka.

When the omicron variant appeared, scientists went immediately on alert. “In the total number of mutations the two variants do not differ much, they have about 55 of them. But what makes them very different is the concentration of these mutations on the spike protein, with which the virus penetrates the human cell. While the delta has about six mutations, the omicron has about 25. In addition, they are concentrated on the interaction region for both the human ACE2 protein, to which the spike protein binds, and also the antibodies,” said Berka, describing the main differences between the delta and omicron variants, visible in the models of their spike proteins.

As early as November, mutations in the spike protein of omicron suggested its significantly higher infectivity, and thus the potential to spread more rapidly among the human population. “I have noticed that mutations at the tip of the spike protein will lead to an increase in the positive charge on the receptor-binding domain (RBD), which will thus bind more strongly to the predominantly negatively charged human ACE2 protein. At the same time, however, the bond between the spike protein of the omicron variant and existing antibodies is weakened, which reduces the antibodies’ effectiveness. Both hypotheses were subsequently confirmed experimentally. These differences in mutations on spike proteins are also probably the cause of the different clinical pictures of Covid-19 between its delta and omicron variants,” Berka pointed out.

The SARS-CoV-2 virus genome has ca 30,000 nucleotides, which encode ca 25 proteins and peptides. “Now there are already experimental structures available for most of them, so it is not difficult to model their mutations using homologous modelling. When comparing variants, I mainly observed the effect of mutations on the spike protein. The modelling took place on the SwissModel server and I used experimental structures in the ‘open state’, in which they bind to the human ACE2 protein, which is the main target of both variants,” added Berka.

Structural models have been used to understand biological processes for some time. 3D visualizations help scientists mechanically describe the interactions between individual proteins. “They show us what mechanisms are used by the cells,” said Berka.

For example, in 2012, the research team of Karr et al for the first time mathematically simulated all processes in the smallest cell of the bacteria Mycoplasma genitarium. Last year, the team Maritan et al built a virtual 3D model of this cell, which shows what the processes between individual proteins and nucleic acids look like. With their help, new experiments were designed that revealed and confirmed new biological functions and showed that this novel virtual cell biology can facilitate the search for new biological discoveries.

“For the visualization of the Mycoplasma genitarium cell model, the authors used the Mol* program, which my colleague Václav Bazgier and I, together with colleagues from the CEITEC research facility in Brno and from abroad, also helped to develop. This program is the only one able to display the whole cell model in atomic resolution in a browser in real time,” added Berka.